In the end, the secret of enjoying Tate Modern’s recent Futurism exhibition turned out to lie in the entertainment of modest, perhaps even downright low expectations.

Futurism‘s reviews were, almost without exception, dreadful. Some could be discounted, admittedly, in the sense that condemning the cutting-edge offerings of our great-grandparents’ mature years for the sole reason that these no longer shock or surprise us is the sort of idiocy best left where we found it. But what can we conclude when even Richard Dorment sets aside his habitual good manners, writing off the exhibition’s installation as ‘more or less incomprehensible‘? And what about the bracing spectacle of Brian Sewell in full denunciatory mode, clearly prompted not only by the fact that he does that particular mode so extraordinarily well, but also because, for once, the organisation of the show in question really and truly deserved it?

The critics were, for once, largely correct. In all sorts of ways, except perhaps in terms of the art itself, Futurism was an unsatisfactory experience. It was disappointing, for instance, to find that only something like eighty percent of the pictures on view at the Paris interation of the exhibition had made it as far as London, notable losses including Joseph Stella’s Battle of Lights, Coney Island, Mardi Gras (1913-14) and Marcel Duchamp’s Nu descendant un escalier n. 2 (1912). This, though, for all its discouraging gravity, was hardly the exhibition’s most serious defect.

The problem was much more elementary, and for that reason considerably less explicable. Perhaps the most basic requirement for any art exhibition is that it should somehow add up to more than the sum of its parts — the gathered objects somehow coaxed into telling a story, making a case or at least conveying an insight. Insofar as Futurism told any sort of story, however, it was one in which the Italian regional specificity of Marinetti’s Futurist movement was swapped for a blandly international smorgasbord including some rather good art that influenced the Italians, some rather weak art influenced by the Italians, and, if one wished to be cynical about it, a few Cubist masterpieces to boost the overall ‘oomph’ quotient, insofar as the rather dry and esoteric alchemies of analytic Cubism might be said to deliver something so coarse as an ‘oomph’. END_OF_DOCUMENT_TOKEN_TO_BE_REPLACED 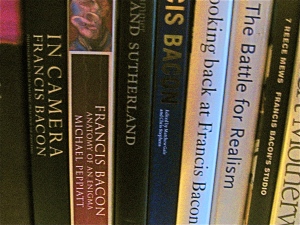 Right at the heart of Tate Britain’s current Francis Bacon retrospective, at the literal physical centre of the exhibition, there is a smallish room. Unlike every other room in the exhibition, this one isn’t lined with large and imposing oil paintings, virtually all of them hung in gilded frames: glazed, reflective, spectacular.

Instead, the room is filled with evidence for the way in which the paintings outside were made. There are pages ripped from art books, pictures on newsprint aged the colour of old jaundiced skin, photos of friends and rivals commissioned from John Deakin, lists in a sprawling generous hand, body-building magazines with homoerotic overtones, ink doodles, pictures of Bacon’s own pictures, photos ripped from current affairs magazines featuring wrestlers and famous Nazis and dead people, prints of film stills, the predictable Eadweard Muybridge sequences, the concrete remains of a less predictable interest in David Gower — all of it torn and battered by use, everything spattered with paint — fodder or perhaps rather compost for the painter’s imagination, the refuse of decades of imaginative consumption and elimination, leftovers of creation, the rich and pungent detritus of the studio floor.

It’s fitting, I think, that this room is at the centre of the exhibition, because it takes us right to the crux of at least the most immediate problems we face in confronting Bacon’s work. Should we be looking at the subject matter, or at the paint? Are we here for horror, about which we’ve all heard so much, or for beauty? Are we in fact doomed to stand staring at all the accumulated clutter, metaphorical as well as actual, of this most public of private lives, or is there any way of getting past it in order to reach the actual art itself — and what would we find if we did?