On the Saville Report

One of the few house rules operative here at Fugitive Ink is a prohibition on posts that merely re-duplicate an obvious point almost certainly made better elsewhere. The web, we all know, is too cluttered already. Why advert to the defects of CGT, for instance, or deplore the persecution of David Laws MP, when there’s scope for a 20,000 word piece on some dead diarist’s minor intellectual inconsistencies instead?

All the same, however, despite several hours of trying, I can’t quite stop myself from posting a few quick lines on the Saville Report, published yesterday — less because I have anything distinctive to say about it, than because the obvious things to be said about it are so crucially important, both for our understanding of recent history and for what civilian commentators believe to be the case about our own armed forces, both then and now.

END_OF_DOCUMENT_TOKEN_TO_BE_REPLACED

Comments Off on On the Saville Report

‘Saved for the nation’: General Wolfe will stay in London 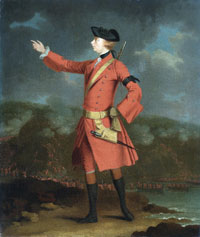 In the palest possible reflection of the fact that it must have taken weeks, at the very least, for news of General Wolfe’s great victory to make its way from the Plains of Abraham all the way back to the grimy magnificence of mid-Georgian London — the stuff of hand-written despatches and soldierly rumour only tardily transformed into those shared-about dog-eared broadsheets, speeches in Parliament, toasts, songs, tableaux, ‘history’ and whatever else Benjamin West might make of it all thereafter — so have I only now discovered, having once again been dragged along by an intelligent three-year old to the National Army Museum, that Schaak’s portrait of General Wolfe, about which I wrote here, has now officially been Saved For the Nation.

END_OF_DOCUMENT_TOKEN_TO_BE_REPLACED

Comments Off on ‘Saved for the nation’: General Wolfe will stay in London